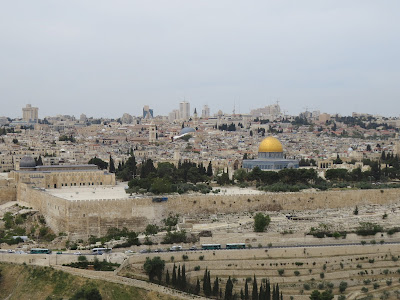 Jerusalem -- what more can I say?
The road climbs up and up until you get  your first glimpse of the old city. The city where Jesus came as a young boy and got so enthralled speaking with the teachers in His Father's House that He forgot to start the journey home with His earthly parents. The city of the temple -- where all males were to offer sacrifices three times each year. The city that received and embraced Jesus, only to turn on Him and demand His death. Oh Jerusalem, Jerusalem. It's still a city of contrasts. Modern and ancient. Arab and Jewish. Secular and religious. Even today Jerusalem isn't sure what to do with Jesus.

Today, the first thing that catches your eye is the soft golden color of all the buildings. Only native limestone can be used to build in Jerusalem, giving the city a soothing golden glow. It's breathtaking. I don't know how else to describe it. You wait your whole life to catch a glimpse, and then it's right there before you with all its history, tears, wars, conflict, promise and glory. Oh Jerusalem. 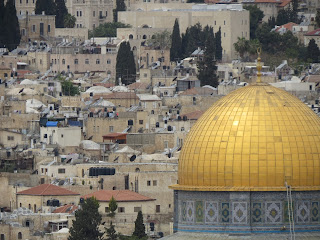 The prominent feature of the old city is the famous golden topped Dome of the Rock. It's a Muslim site built in the 7th century, and it's actually a shrine, not a mosque. It is thought to be built on the famous rock where Jews and Christians claim Abraham was willing to sacrifice his beloved son Isaac. Muslims believe it to be the rock where Muhammad ascended into heaven. Many people believe the Dome of the Rock is built on the site of the Jewish temple that was destroyed in 70AD. Tensions can run high just talking about such things. That's Jerusalem. You don't visit and remain indifferent to its beauty or its history.