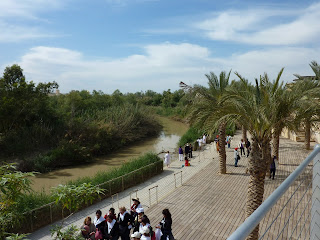 We made a brief stop at the traditional site of the baptism of Jesus. There is a small area for people to be baptized today, but the river here is quite small and muddy. There is an alternative baptism site more popular with tourists farther north near the Sea of Galilee. That's where we were baptized in the Jordan on our last trip to Israel -- an experience I'll never forget.

This site is near the city of Jericho and also a few miles away from where the Jordan River empties into the Dead Sea. It is in a stark, dry area in what we would call a demilitarized zone. There are fences keeping people from straying into an area with land mines. We did not stray! Directly across the Jordan River is the country of Jordan. You could throw a stone across the river and hit another country. But I wouldn't advise it -- there was a Jordanian guard on the other side who might not be so happy. 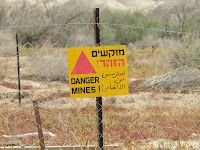