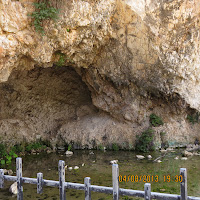 This is the site where God had Gideon thin out his army before going into battle. Judges 7 contains the account. God did not let Gideon take his entire army or they would boast that their own strength saved them. God separated the men by the way they drank water from this spring. The Lord left Gideon with only 300 men to defeat the enemy. God used a few ordinary men to accomplish an extraordinary feat.

God still uses ordinary people in extraordinary ways today. He delights in using the unlikely to do what seems impossible. That's God's way. Otherwise we would be prone to boast in ourselves, when God alone deserves the glory and honor and praise. God alone.
Posted by Elaine at 7:07 PM