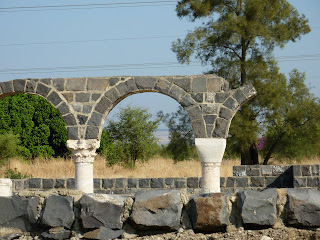 This day was moving day for us -- moving from the Sea of Galilee to Jerusalem. Our first stop was Kursi, on the east side of the Sea of Galilee in what was Gentile country in the time of Christ. This was a fascinating place for several reasons. First it was the place where Jesus cured a demon-possessed man, and sent the demons into a herd of pigs. The man who'd been cured begged to go with Jesus. However, Jesus told him to stay where he was and "tell how much God has done for you." That is just what the man did. The story is found in Luke, chapter 8.

Mmmmm. Personally challenging. Am I satisfied staying in my area of influence telling what God has done for me? Am I as concerned for people as Jesus was?

Kursi is located at the foot of the Golan Heights. We visited the ruins of a Byzantine church, built at the command of Helena, mother of Constantine in around 326AD. Helena toured the Holy Land and built churches on sites important to Christianity. Because of her, we know the location of many of the Biblical accounts.

At Kursi, we were cautioned to stay on the path that ran between the church and the open field. The open field contained buried land mines left behind by the Syrians after the Six Day War. Our tour guide fought for the very land we were standing on while he served in the army. He told us the story of Israeli spy Eli Cohen, whose information was crucial in the Six Day War. Here's a link to read more about his story if you're interested. http://en.wikipedia.org/wiki/Eli_Cohen

Israel is such a fascinating place.
Posted by Elaine at 11:43 AM