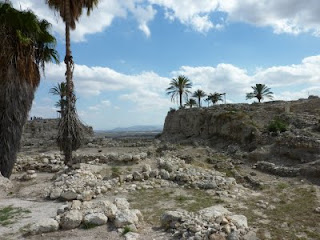 Our 2nd stop on Day 3 was Megiddo. The Hebrew word "Har" means mountain. Drop the "h" and put the 2 together and we see a more familiar word -- Armegiddo -- or Armageddon. Yes, this is believed to be the site of that future battle when Christ will come again and win victory over the forces of evil. The valley of Armageddon is huge and very strategic. King Solomon kept chariots and horses at Megiddo, and we saw the ancient evidence. We descended 183 steps to see the underground water system that King Ahab built to help withstand enemy attack.

Lon talked about how record numbers of Jewish people are coming to Christ. It is estimated there are 60,000 Jewish believers or Messianic Jews. We can't say for sure how close we are to the battle of Armageddon described in the Bible, but we are seeing signs of things that must first happen. One thing we do know, each day draws us closer to the second coming of Christ.
Posted by Elaine at 11:14 AM