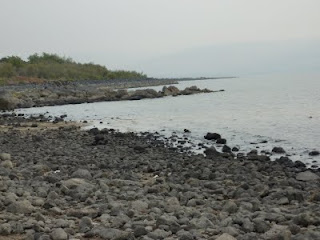 Day 2 began with an unexpected visit to a site on the shore of the Sea of Galilee -- The Church of St. Peter's Primacy. This is the location where Jesus appeared to the disciples after the resurrection as told in John 21. Jesus asks Peter 3 times, "Do you love me?" Then Jesus instructs him to "feed my sheep." I love that Jesus asks Peter 3 times. Remember that Peter had denied Jesus 3 times on the night of His arrest. It's like Jesus gave him a "do-over" and Peter is able to declare his love for his Savior as many times as he had denied even knowing Him.

By asking Peter to care for His sheep, Jesus let Peter know he is still of service in the kingdom of God. He did not blow it beyond repair. He did not out-sin the power of God to forgive. He did not flee so far away that God could not reach him.

Lon's message here was powerful. God's love in unconditional. His love is more healing that any pill, therapist or scalpel. And God always initiates. He sought Peter out where He'd first found him -- fishing on the Sea of Galilee. God always seeks us. Aren't you glad?

On that ancient shore we contemplated such love and sang . . .